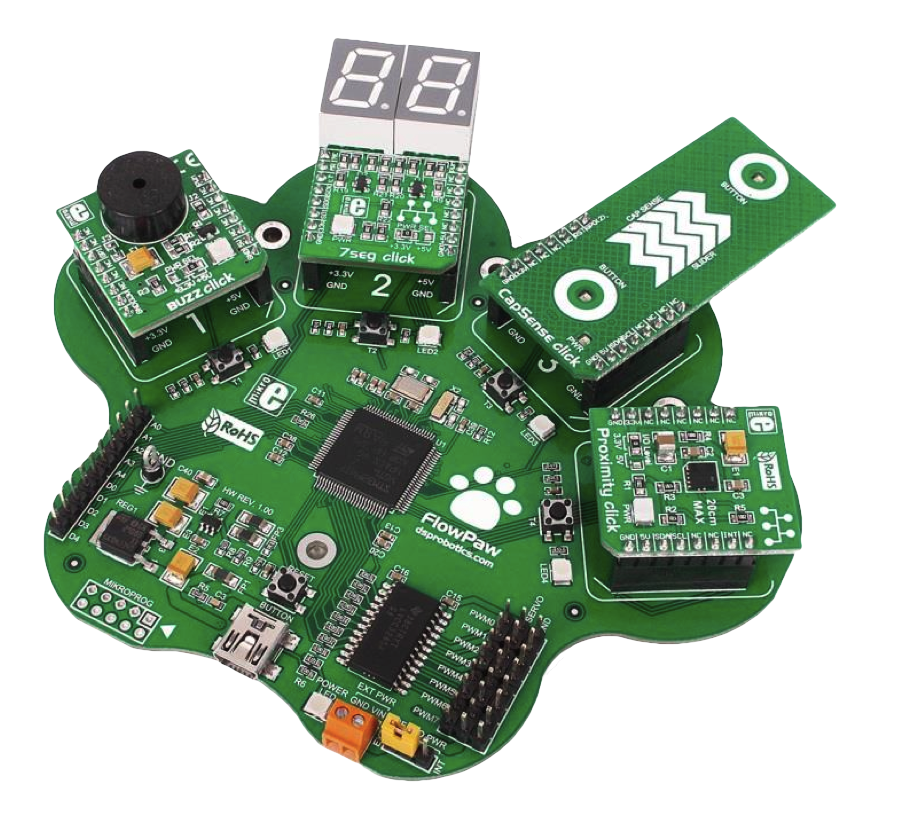 In this case a buzzer, a LED display, a capacitive touch sensor and an infrared proximity sensor.

The board spec was:

The design was worked out with MikroElektonika and within a matter of weeks the first prototype boards were on our desk!

Since ‘Bear Paw’ was already used to describe lot’s of other products and that this would be designed to work with the FlowStone Programming Language we decided on FlowPaw and here it is: 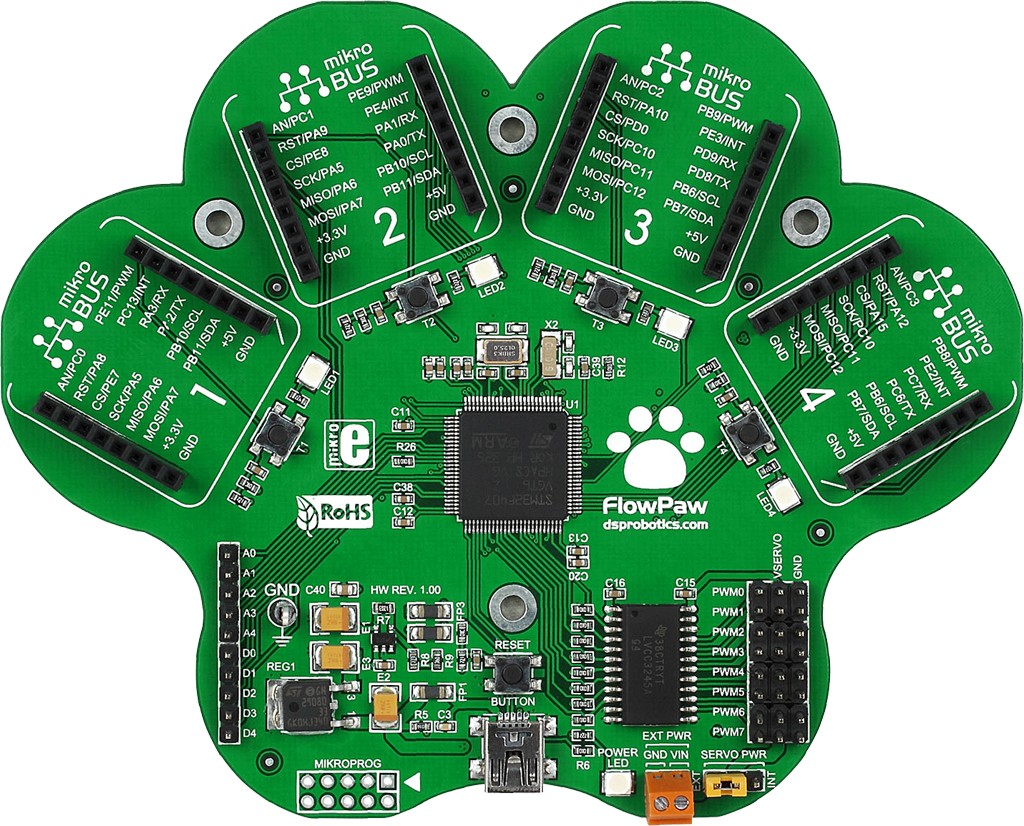 Following on from the Hand idea we decided that a Paw would be better, a Bears Paw with Claws! 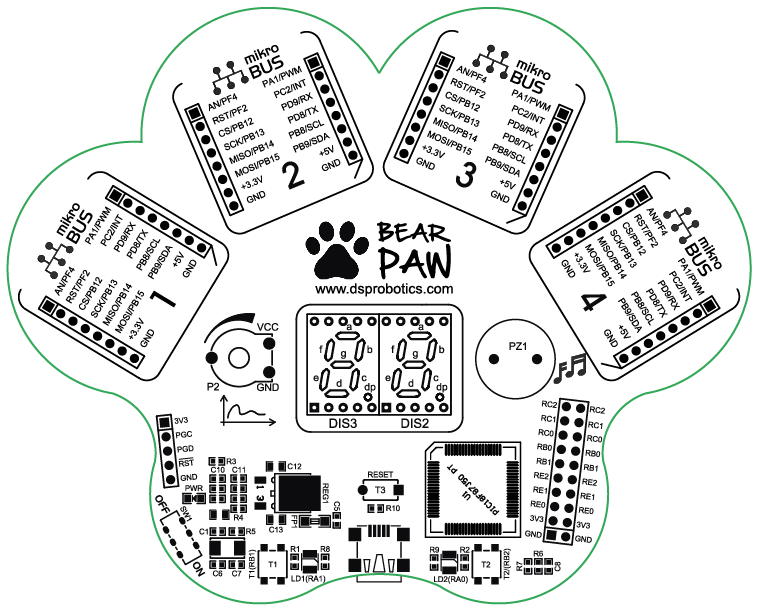 Then came the idea of making it into a Hand with fingers and calling it H&: 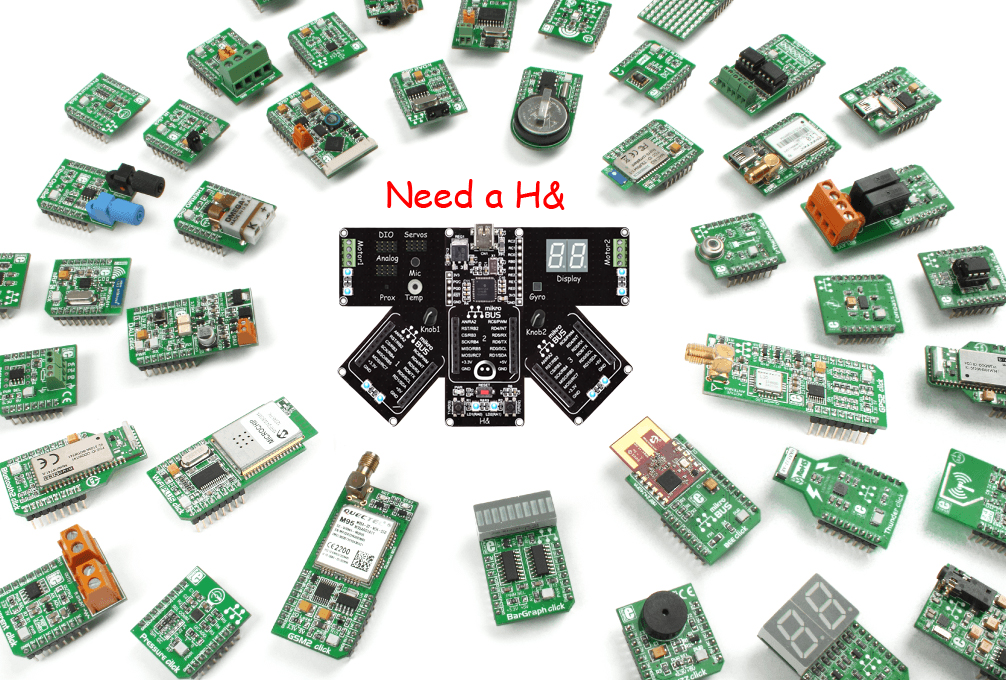 One product we tested was called the PIC Clicker from Mikroelektonika (renowned producer of compilers, development boards, debuggers and books).

This was an initiative USB interface board a bit like an Arduino but with a PIC microprocessor chip on-board and a special socket call a Mikro Bus Socket that would accept a huge range of sensors and displays etc. 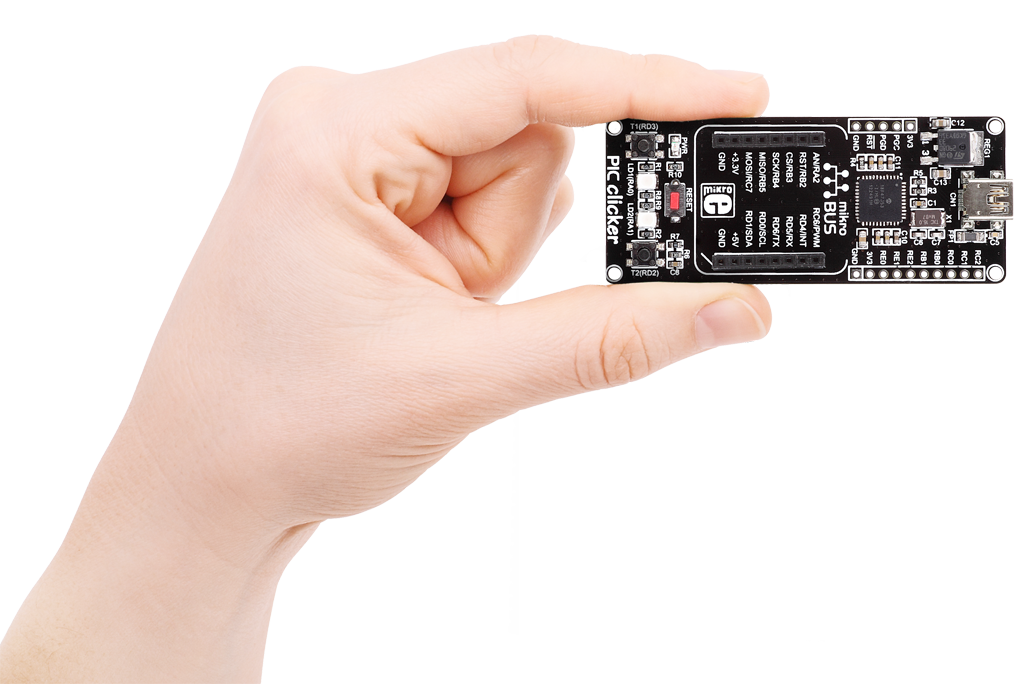 Using the Mikro Bus sockets we could attach various sensors and displays controllers to the PIC Clicker board :

We programmed this little PIC Clicker board to work with FlowStone, our programming language, and a range of the Mikro bus Click boards an idea was born!

What if we could connect more then one Click board at the same time?

So the creative process began: 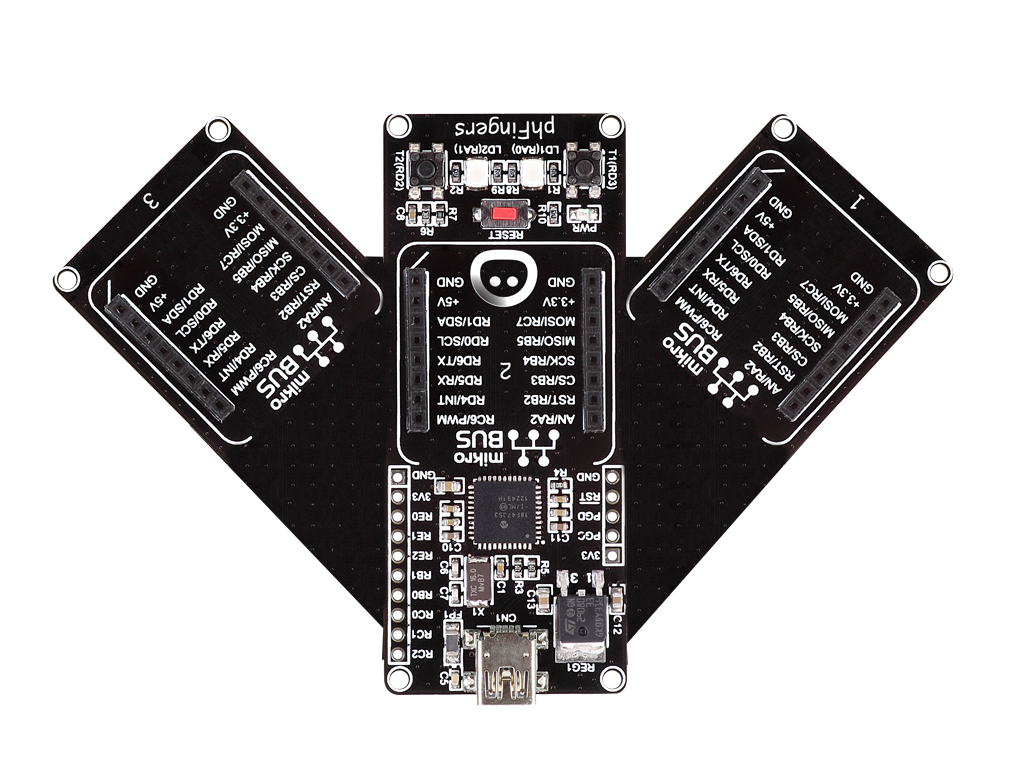 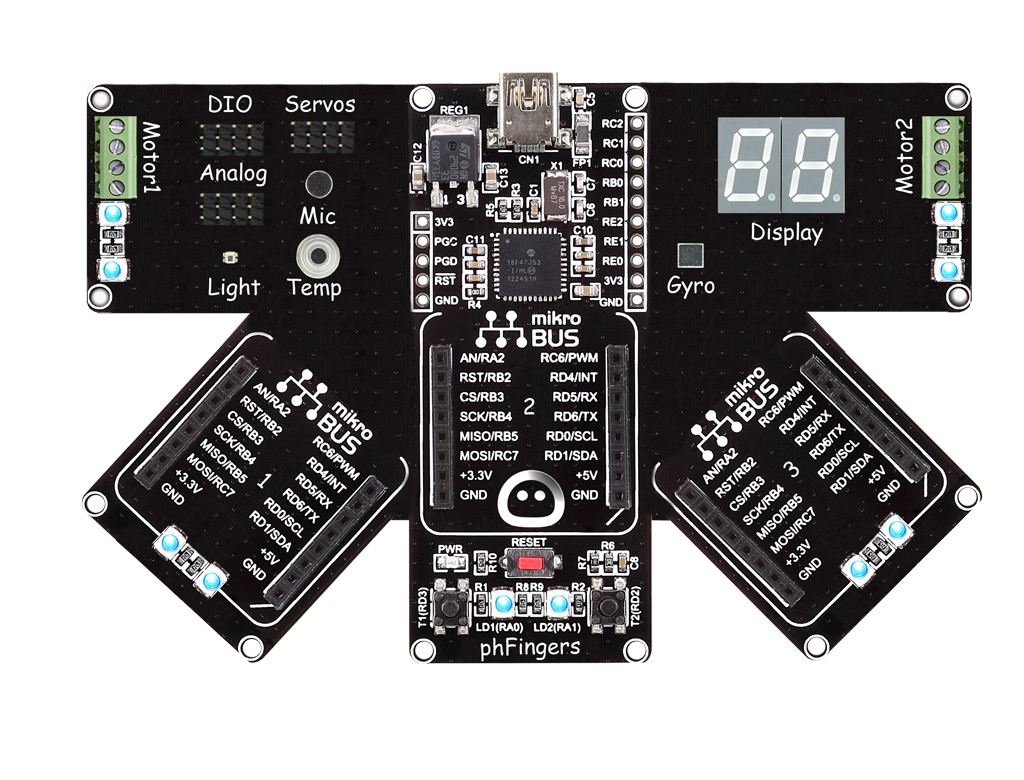 There is so much electronics hardware out there it’s overwhelming and one thing we had noticed at DSPRobotics is that most of it is designed by engineers for engineers! Meaning  it is over complicated, difficult to use,  hard to program, and on most cases aimed at adults even if they said it is suitable for children or students.

We have tested most of it, and even written an abundance of magazine articles about how to program it, the truth is it’s all really hard! We wanted to make things simple and easy to learn yet have the ability to expand and grow with it. 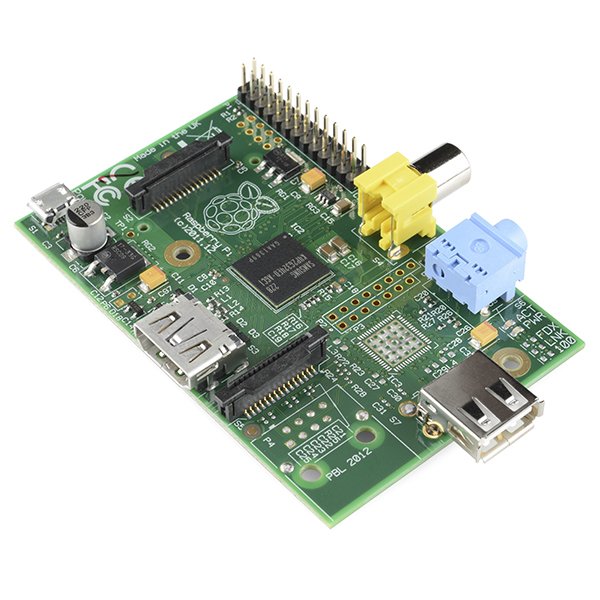 Raspberry Pi is great if you don’t have a computer already but remember you will need an HDMI Monitor, Keyboard, Mouse, Power Supply, SD Card etc. Which adds to the cost plus it runs Linux which you may not be familiar with?

You can run Scratch and Python on it (which you can also run on any PC) but if you want to interface to the outside world for Physical Computing & Robotics:  it suddenly gets complicated, you need to know  about electronics, protocols, and read lots of chip datasheets: ie.  Voltage & Current Levels, I2C, SPI, GPIO addressing etc. In fact all of this stuff was exactly the same on FlowPaw only we have done it already for you so it just works out of the box! 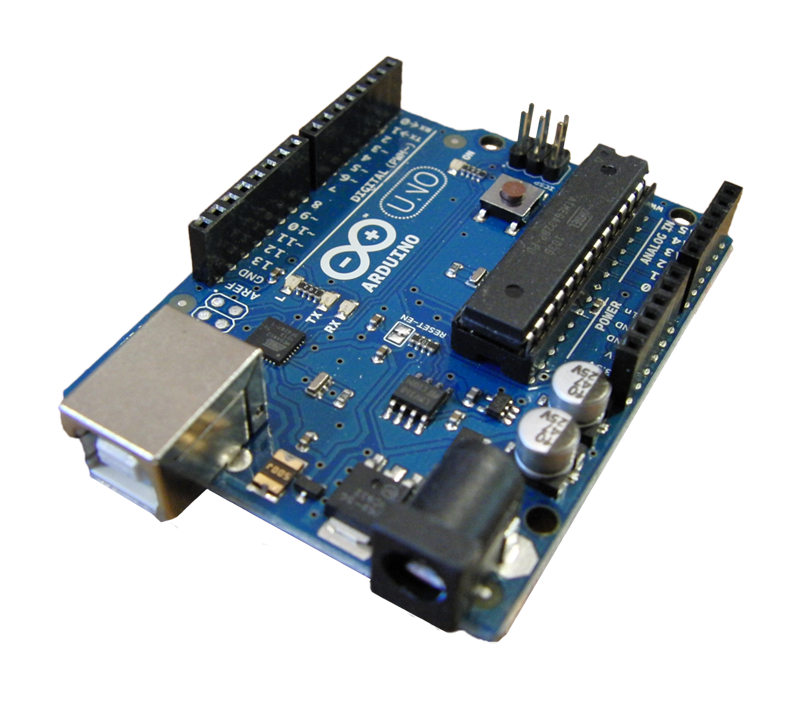 The Arduino boards are simple microprocessor boards with a processor chip that you can program using the Arduino programming language which is a bit like C++.

These are great if you want to make an LED flash on and off, but if you want to do anything more complicated you are back in the realms of needing to know a lot about low level programming, electronics, protocols and data sheets. Also you have to write your program in a text editor then download it into the chip , if it doesn’t work first time you have no way of knowing why? You have to go back to your text based code and try and figure it out, in contrast  FlowStone runs in real time as you program you get to see the numbers changing and your code at work, making it easier and quicker to develop.

This is where we came up with the FlowPaw concept: a Hardware + Software combination! 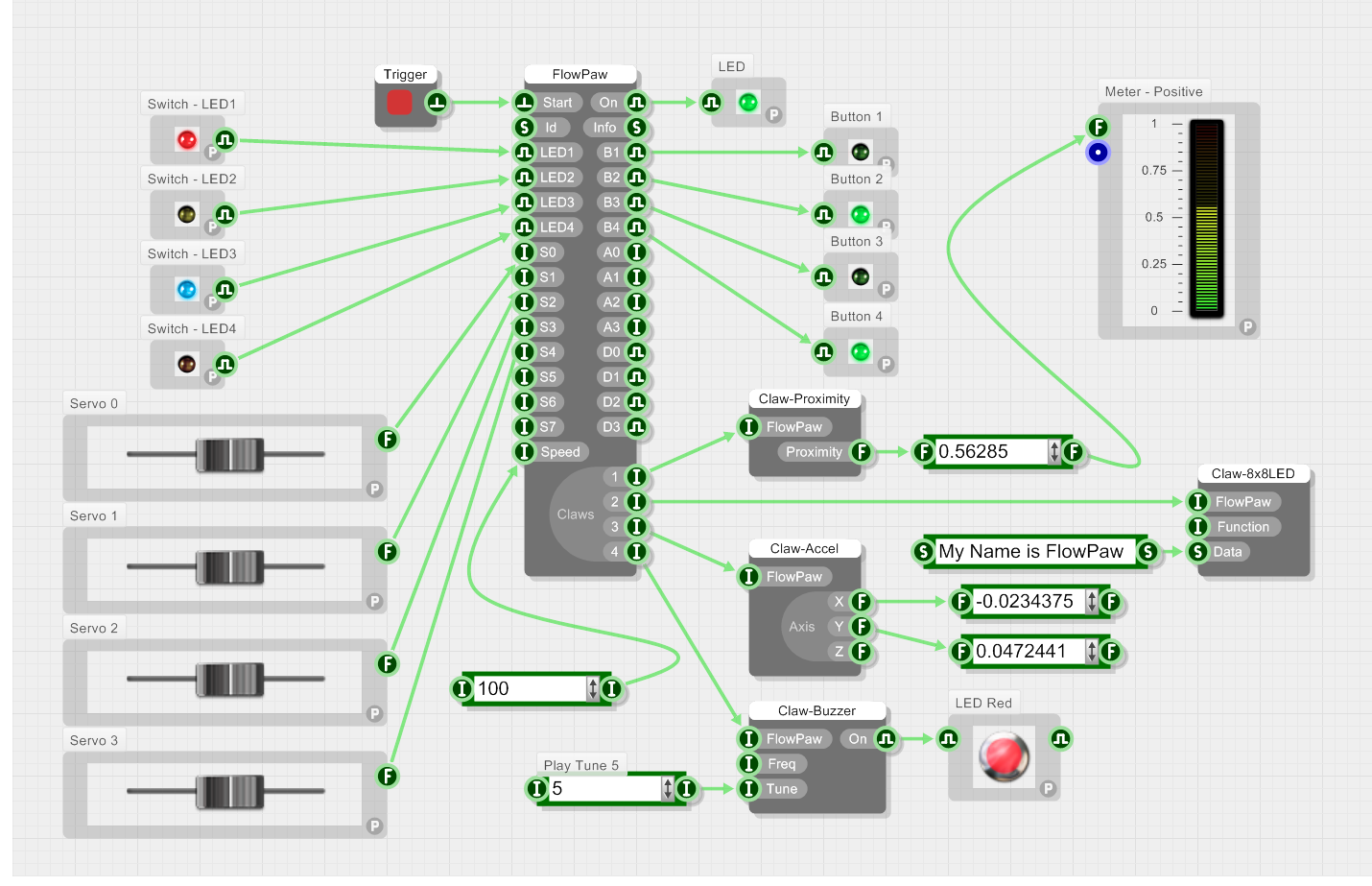 It is the best of both worlds, FlowPaw connects directly to your PC via USB, it’s plug and play, no external power is need. It has a microchip on board, only far more powerful than the Arduino, however we have done the low level chip programming for you so it just works! Then you can control the board using FlowStone which is a joy to use as it combines both Graphical Programming and code based programming all in the same elegant development environment allowing you to grow at your own pace. 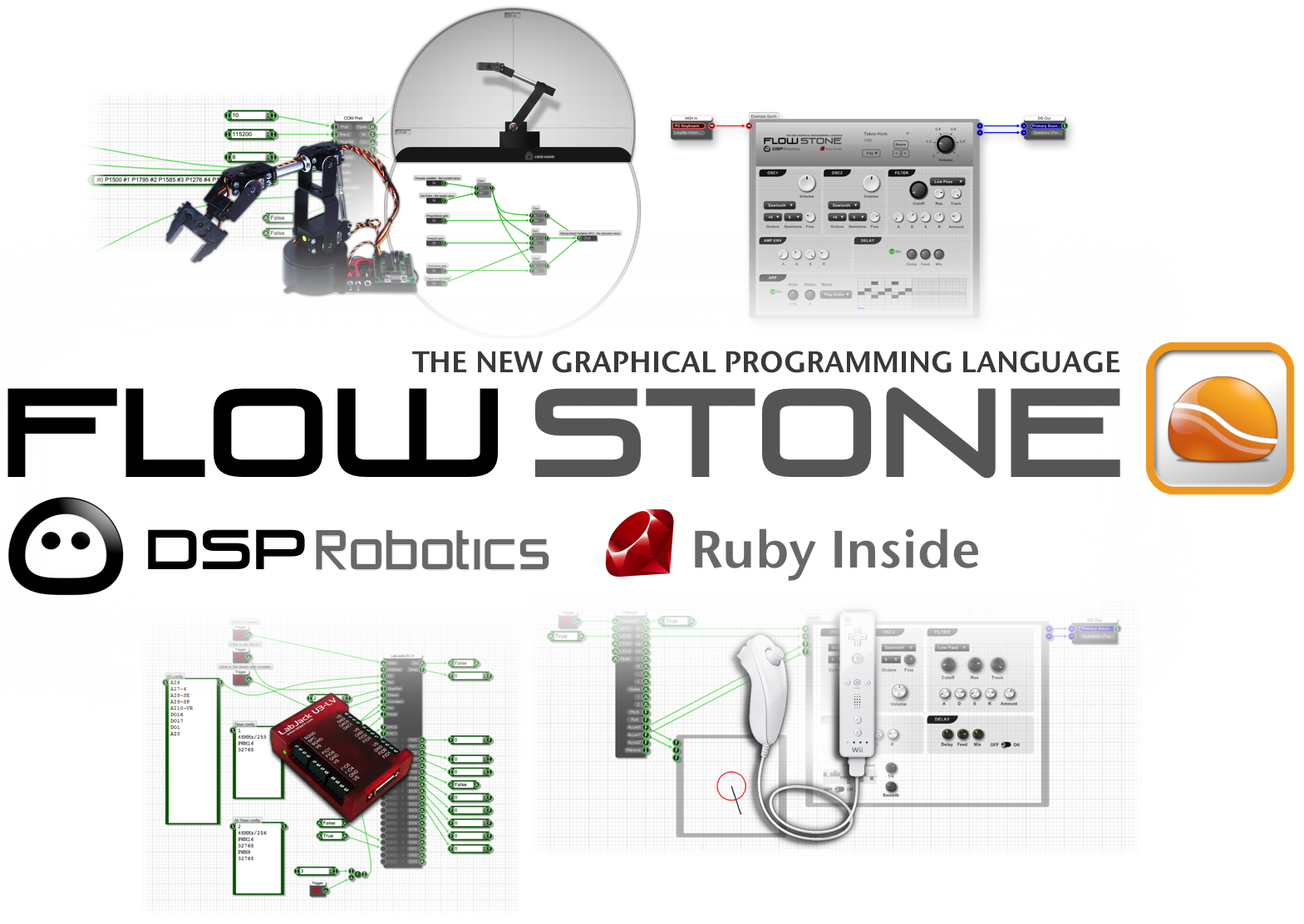 FlowStone can be used to quickly write computer programs for almost anything, using a combination of pre-made building blocks and actual computer code. This speed of creativity is inspiring in it’s own rights but it needed some teeth!

Software is eating the world – but hardware give’s it teeth!

Here @ DSPRobotics we have been working with lots of schools, colleges, and universities, as well as teachers, pupils and parents all over the world with one aim: To encourage young people to get involved with Technology, become Digitally Literate and more importantly be inspired!

We are not talking about being able to wow your friends with the latest iPhone app, send emails or SMS messages but really get involved by creating your own new technology using a combination of computer programming and physical electronic systems that move, flash, buzz, measure, display etc. Not in the virtual world but real physical things that you control and create.
We call this new world of discovery: Creative Physical Computing!

In order to bring ‘Creative Physical Computing’ to life we needed two things:
1) Some amazing easy to use software
2) Some amazing versatile yet simple hardware

For the first time ever we have both elements ready at the same time – software and hardware:

FlowStone – the award winning programming language with both graphical and code elements, that is easy to learn and teach.

Above is the story of how it all started: